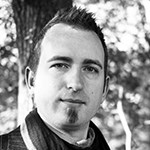 Robert Silesius is an interdisciplinary designer from Sweden. With roots in computer science, he began his transition by doing interface design. From there he got a full bachelor degree in product design in 2007 and then a master degree in vehicle design in 2011 at the prestigious Royal College of Art. This long journey has given him a problem solving, user centered focus. He has worked as an interaction designer and product designer, and exhibited at the Stockholm International Furniture Fair, Sustain RCA Show and the London Transport Museum.